I have been pretty busy lately. I have been getting settled into our new church and home. We moved in December but went to Mexico to see Jesse and Rebecca the end of January. We were getting on a plane to come home and found out that our son in law Terry had fallen and had a serious head injury. I went there for a few weeks to help out as Hillary was doing a lot of running to the hospital and I was able to help watch the children.

When Terry began to feel more like himself I went home. Just a short time later I went back as Hillary was due to deliver their fourth child soon. Baby Colton was due mid-April but took his time.

Our son Tim’s wedding was the 29th of April and so on the 27th we headed for Maryland for the celebration. We were just getting to sleep after the wedding ceremony and we received a call from Hillary that she was in labor. We were set to leave for Michigan at seven in the morning – only a few hours more….but around 5 AM, Terry called to say Hillary was about to have and emergency C-section. We were all greatly rejoicing when Colton Lee arrived safely weighing 10 pounds and 14 ounces!!

We drove straight to the hospital and found our precious children and our eleventh grandchild safe and happy.

Soon after Hillary was feeling strong enough to manage her family I returned to mine.

Just a day later Jim was in the hospital with gall bladder complications. He ended up staying 10 days and finally had his gall bladder removed and he is now getting his strength back and is back to work.

I am so happy to be home again and Andrea and I are trying to make up for lost time doing school work. Andrew will have to do his catching up a little later. He is busy working this summer. Seth is working right now with Terry doing docks.

I keep wondering what normal is like and wondering if I will ever know….. 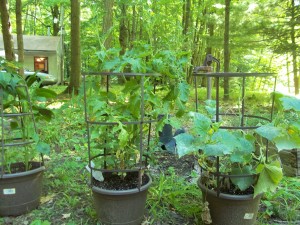